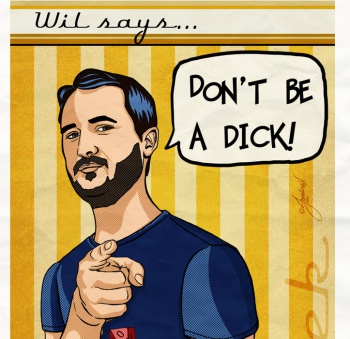 Wil Wheaton celebrates his big four-oh by declaring it "Don't Be A Dick Day."

On July 29th, Wil Wheaton, nerdling prince and former Star Trek incumbent, will turn forty years old. While it's traditional to receive gifts on one's birthday, Wil only wants one thing from you: He wants you to avoid being a dick.

"Hi! I'm Wil Wheaton, and my birthday is July 29th," reads a message on dontbeadickday.com. "I can think of no better birthday gift than for my birthday to be known as Don't Be A Dick Day."

"I believe in you, Internet. I know you can make this happen."

How does one celebrate Don't Be A Dick Day? If the website's FAQ and this handy chart are to be believed, all you need to do is check if you're being a dick. Then, should you discover that you are, in fact, being a dick, cut it out.

The message echoes a statement Wheaton made at ECCC back in 2011.

"I actually have a thing to say to guys who play video games," he said. "When a woman joins the game, like ... don't be a dick."

Words to live by.

Source: Don't Be A Dick Day