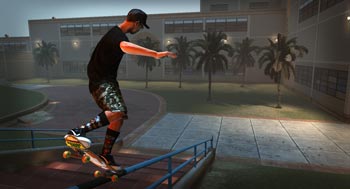 Tony Hawk pro Skater HD has shifted 120,000 copies in its first week, despite a less-than-enthusiastic response from critics. While some outlets knocked its controls, most of the critical-frowning was directed at the game's lack of content. Despite being a billed as a kind of compilation of the first two Tony Hawk titles, the game features only seven levels, and it's missing some other essential components as well

According to Robomodo CEO, John Tsuio, after the critical and commercial failure of Ride and Shred, Activision was hesitant to give Tony Hawk another shot at reclaiming its former glory. The developer had to pitch a smaller, and most importantly, cheaper, title to get Activision to give the go ahead. It seems to have worked out, the success of the recent HD remake means we'll likely see a more fleshed out sequel.

"By making it 'lower risk' we were allowed to take some chances, which benefits both developer and publisher." Tsui told Gamasutra, before adding that the title's success means "the prospect of a fuller game is definitely on the table -- it's just a matter of when and how."

"We were given the right amount [of resources] based on the scope of [Tony Hawk's Pro Skater HD], but obviously we would always want more to go bigger," he continued. "I don't think hits these days look the same as they did back in 1999 or 2000, so it would be great to see the Tony Hawk franchise do interesting things on a variety of platforms."

Mahalo: MLB 12 The Show: How To Make The Most of the Worst Teams Mahalo 7 Comments