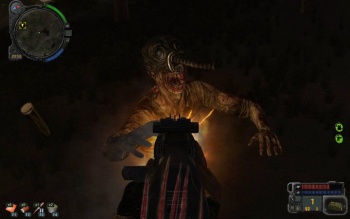 The rights to the S.T.A.L.K.E.R. franchise are reportedly now in the hands of Bethesda.

There was much wailing and gnashing of teeth among fans of post-apocalyptic shooters late last year when word got out that the S.T.A.L.K.E.R. 2 plug had been pulled. For gamers who prefer their end-of-the-world nightmare scenarios grim, punishing and resolutely unironic, the S.T.A.L.K.E.R. franchise was an unending hotshot of perfect bleakness, and the loss of the long-awaited full sequel - especially after GSC Game World had finally pulled it all together for the last S.T.A.L.K.E.R. game, Call of Pripyat - was a real blow.

But fret not! Or at least, fret about something else, because the word from Sergey Galyonkin is that S.T.A.L.K.E.R. 2 is not dead and buried, but is instead in the hands of Bethesda. Between a horrifically mangled Google translation and the good folks at Rock, Paper, Shotgun, it appears that the studio behind the Elder Scrolls and Fallout franchises now holds the rights to develop and publish a new S.T.A.L.K.E.R. game, although the rights to the brand remain with GSC Game World boss Sergei Grigorovich.

And who is this Galyonkin guy? He was formerly the director of marketing at S.T.A.L.K.E.R. publisher 1C company, and is also the fellow who confirmed the closure of GSC Game World and the end of S.T.A.L.K.E.R. 2, at least in its current state. He has a pretty solid track record of knowing what he's talking about, in other words.

None of this is to say that Bethesda is currently working on a new S.T.A.L.K.E.R. game, and the more cynical-minded folk out there might suggest that the company picked up the game rights simply to eliminate a Fallout competitor. But that's an unlikely proposition; the two games are only superficially similar, and S.T.A.L.K.E.R., despite its genius, has nowhere near enough of an audience to pose a threat to Fallout. It does feature the sort of sprawling, open world that Bethesda games are famous for, however, and before everything fell apart GSC Game World had expressed serious interest in broadening its audience by bringing the franchise to consoles.

Is it? Will it? Could it? Would it? All Bethesda has to say about the situation at this point is, "No comment."