Kixeye invites developers to join "the best damn gaming company on the planet".

When it comes to recruitment campaigns for the game industry, most job applications tend to be as dry and unexciting as every other profession one can apply to in life. That's because design teams are places that require a degree of professionalism, and as such require very standard applications like this one for Valve, or this one for id. Facebook games developer Kixeye looked at these recruitment styles, then threw them out the window to come up with something far more awesome, all while taking the opportunity to lambast their rivals.

The video posted to the right appeared on YouTube and Kixeye's website this morning, and puts the viewer in the perspective of an interviewee meeting with satrical versions of actual game companies. The first, representing Zynga, is run by a demanding foul-mouth child who switches between verbally harrassing the interviewee and ordering Yoo-Hoos from his secretary. The second, representing EA, is led by an old man who'd rather reminisce about "the good old days" while trying to keep his dentures from falling out of his mouth. The third, Kabam, is a data-based company that uses a wheel of popular gaming trends to determine what the developer will be making for the next two years. "Oh look," he says, "'Zombie Castle Rescue'. Hardcore."

Finally, the developer turns to Kixeye's interview. "What is best in life?" the developer is asked. "Is it to crush your enemies, see them driven before you, and to hear the lamentations of their women? Well, that's a pretty good start. But at Kixeye, we want more then that. We want to make games for gamers by gamers." He then proceeds to give the most motivating speech a developer could ever possibly hear before putting on a unicorn mask and flying away in a helicopter.

Apparently this is the style of advertising that Kixeye always used, it simply never drew attention on the internet because it was usually limited to large prints in their home location of San Francisco (seen below). This video appears to be part of a larger push to import fresh new talent through the internet, as also shown in an "Are You One Of Us?" application quiz available on their website that lets you choose between using a Gentleman's Pistol or a Rocket Propelled Grenade Launcher to answer questions. According to comments on the video's YouTube page, Kixeye's campaign has been a huge success that will draw many candidates. Now it's up to Kixeye to go on to produce games that are as good as the advertising claims. 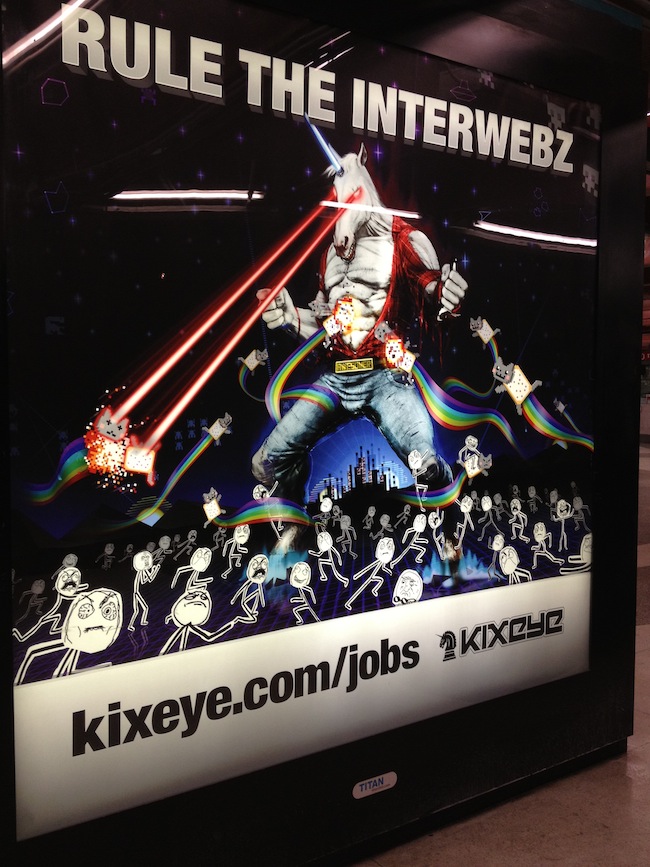