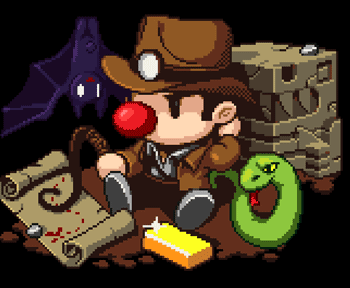 Drop a bomb next to your workload with in-browser Spelunky

You should probably be working right now. That's okay, so should I. But while you're shirking your responsibilities, why not play an in-browser version of Derek Yu's fiendishly difficult Spelunky that can easily be concealed amongst those TPS reports you're supposed to be writing?

The port, made by one Darius Kazemi, is far from perfect. There's no sound, a number of graphical quirks, the dark levels don't live up to their name and Kazemi had to implement a number of quick and dirty hacks to fix major bugs, but overall, not bad for a port that took three hours.

Though recently spruced up and re-released on XBLA, the original version of Spelunky was made in YoYo Games' GameMaker. About a year back, the company released a handy tool that lets users take GameMaker titles and compile them into JavaScript that can run in a modern web browser. According to Kazemi, this should be a one-button process, but Spelunky's complexity made the port harder.

If you want to play the full game, sans bugs, you can download it for free here. Or, if you like your graphics shiny and your wallet lighter, you can pick up the well-received 360 port for 1200 MS points.

Jimquisition: Shaming PC Ports Because Why Not? Jimothy Sterling 175 Comments
Comments on