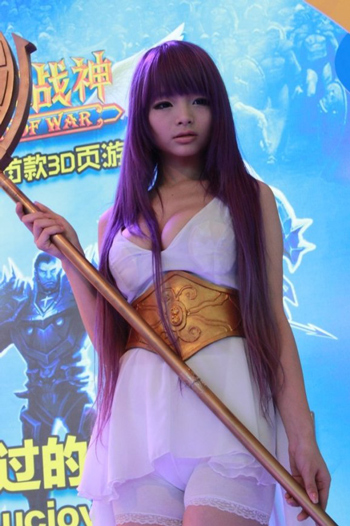 A Chinese model was banned from this year's ChinaJoy gaming expo for showing too much skin.

Tired of having to wade through a sea of exposed mammaries every year, the organizers of ChinaJoy 2012 have implemented a strict new dress code for this year's show. The new rules ban bikinis, backless clothing and low riding hot pants and miniskirts. Underwear is no longer optional.

"Because adolescents make up our primary audience, we do not want to send them the wrong message," event organizer Yu Kun told the Global Times.

The expo, which has been running since 2004, tasked 30-40 staff members with patrolling the convention floor space in search of semi-naked rule breakers. Any model found displaying too much flesh was removed from the premises, and event organizers have stated they intend to "fine" the companies that hired the models by withholding a part of their event deposit.

Model, Li Ling - who can be seen in the above right breaking at least three of the aforementioned rules - was booted from the show after she took to the stage in a somewhat minimalist interpretation of Athena's dress from Saint Seiya. The 22-year-old model was promoting Legend of Saints for developer, ZQGame, and probably didn't choose her own costume.

"Today, after my first performance finished, I was told by the organizers to leave immediately and that I am forbidden from coming back tomorrow and the day after," she wrote. " It happened all so quickly and I don't know what to do now. I was just doing my job... Being a booth girl is hard: while it looks like we may be basking in the spotlight, we're really struggling. Keep going everyone, you have 2 days left...though I have to go home earlier than planned."

In the US, PAX already has a similar ban on overly-revealing costumes. At this year's PAX East, professional model, Jessica Nigri, went through two different Lollipop Chainsaw costumes before finding one PAX organizers deemed suitable.