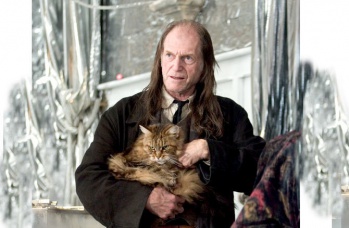 An ambitious biology major has revealed the scientific reasoning for the dominant wizarding gene.

Genetics among the witches and wizards in the Harry Potter universe is a confusing topic. How does one explain Muggle-born wizards, wizard-born Squibs, and the claim from prominent wizarding families that purebloods are better? One Harry Potter fan thinks she has the answer: trinucleotide repeats.

Biology major and Harry Potter fan Andrea Klenotiz formulated her genetic theory following author J.K. Rowling's statement that the wizarding gene is dominant. After protests by "a bunch of fans who stopped learning genetics after Punnett squares in fourth grade," in Andrea's words, she used her biology knowledge and a massive amount of research to defend Rowling's statement. Andrea sent the author her six-page paper of her theories, as well as posting it on her Tumblr.

This is the basis of her support of the wizarding gene as dominant:

The Huntington's Disease Collaborative Research Group (1993) proved that the disease was caused by CAG (cytosine-adenine-guanine) trinucleotide repeats. The Huntington gene is dominant and autosomal (not linked to sex chromosomes). Normally, a person has 11 to 34 CAG repeats in the gene of interest, which causes the transcription of the normal huntingtin protein. Unfortunately, when an individual has 42 to over 66 CAG repeats, the abnormal huntingtin protein transcribed causes serious symptoms later in life. The huntingtin gene with an abnormal number of repeats shows dominant patterns of inheritance over the huntingtin gene containing a normal number of repeats. Let us postulate that the gene determining magical ability contains trinucleotide repeats.

Trinucleotide repeats are inherently unstable, so DNA replication errors, such as slippage, are more likely to occur. The repeat sequence can become longer over succeeding generations because these sequences are often susceptible to genetic expansion, a type of mutation which increases the number of repeats... If 100 repeats are necessary for the gene to be of the magical dominant allele variety, the recessive non-magical, or muggle, allele type might only contain about 50 repeats. So, within a range, most muggles have about 50 trinucleotide repeats, but like any other trait there will be variation and some muggles might have 90 repeats and still be phenotypically non-magical. Muggle-borns are caused by spontaneous mutations... A muggle with about 90 repeats could, through genetic expansion, produce a child with at least 100 repeats (muggle-born witch/wizard). Though the muggle would still be more likely to produce a non-magical child, he or she would have better odds of breaking the 100 repeat threshold than two muggles with the usual 50 repeats.

The paper goes on to explain the presence of Squibs, non-magical humans born to wizard parents. As it turns out, there are two possible explanations for Filch and Mrs. Figg: "Either the individual did not inherit the wizarding gene despite TRD ... or the individual has a rare deletion mutation removing a series of trinucleotide repeats." Andrea even hypothesized that varying levels of power in wizards could be attributed to a pronounced phenotype caused by an extreme number of trinucleotide repeats over several generations.

The full paper delves even deeper into the science of wizarding genetics, and all Andrea wants in return for her impressive work is for Rowling to sign her 15-item bibliography. If an ambitious math major could determine the statistical probability of Slytherin members becoming dark wizards, we would be even closer to solving the mysteries of the Harry Potter universe.

Featured Articles: We Can Be Heroes Michael Westgarth 19 Comments

For Science!: This Is How Star Wars Can Redeem Midichlorians Rhykker 55 Comments
Comments on