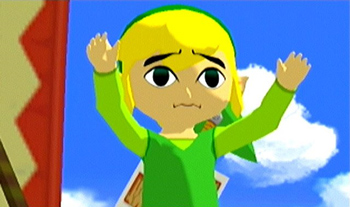 "I had way more emotions playing Proteus than I ever did playing any 2K game," says Notch.

As he told GamesIndustry International:

"Recreating a Mission Impossible experience in gaming is easy; recreating emotions in Brokeback Mountain is going to be tough, or at least very sensitive in this country... " he said. "It will be very hard to create very deep emotions like sadness or love, things that drive the movies. Until games are photorealistic, it'll be very hard to open up to new genres. We can really only focus on action and shooter titles; those are suitable for consoles now."

The responses to Hartmann's comments have been abundant and vitriolic as gamers scramble over each other to provide counterexamples. One such dissenting voice belongs to Minecraft creator, Markus "Notch" Perrson, a developer who doesn't hold much stock in photorealism.

"No, Christoph," he tweeted, "you limit the number of new genres if you focus on photorealism."

He then added the following:

"I had way more emotions playing Proteus than I ever did playing any 2K game."

"Also, Futurama has made me feel sad more than most sad movies can.

"The Sting, Jurrasic Bark, Luck of the Fryish. Photorealistic? No."

Personally, I'm wondering if Hartmann misspoke in the original interview. The idea that non-photorealistic visuals make it difficult to convey emotions is just straight-up wrong, as any first-year animation student will tell you. His comment on games expanding into new genres once photorealism is achieved seem more reasonable, though many argue that the increased costs such a graphical style would entail would hinder creativity rather than encourage it.