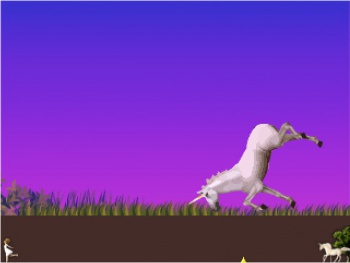 And so begins the epic tale of one man, his unicorn, and an insurmountable hill.

Four years go, Oxford University philosopher Bennett Foddy developed flash game QWOP, an exercise in videogame griefing in which players attempt to control a sprinter in a 100m race by moving individual leg muscles. "Control" here is used in the loosest possible sense, as most players' attempts ended with the runner being catapulted upside-down in a cascade of flailing limbs. Foddy's latest game, CLOP, emulates that same feeling of despair in a somewhat different setting.

CLOP sees players taking control of a unicorn, with each leg mapped to one of the H, J, K and L keys. The gameplay itself will be familiarly frustrating to QWOP veterans, as the slightest misstep causes CLOP to either fall to his horn or flip wildly onto his back. The eponymous unicorn ends the game's introduction by saying, "Thou knowest I mislike hills," and he certainly isn't lying - unlike QWOP's flat running track, CLOP has to deal with steep inclines, pits and rocks littering the "high and pleasant hill" separating CLOP from his goal.

Foddy developed CLOP in a similar vein to the difficulty of his earlier games, only this time in a far more subtle way. Rather than making the game near-impossible right from the start, Foddy decided he would lull players into a false sense of security with a long flat section to learn the controls before literally ramping up the difficulty. "It's much easier to custom-design a difficulty ramp when the difficulty comes in the form of an actual ramp," he jokingly told Gamasutra.

As with QWOP, it's possible to master a certain rhythm to proceed, but as of yet winning strategies seem few and far between. One easy method available is to drag yourself along only your front legs. However, Foddy foresaw this, and decided to punish players doing this by saddling them with "Lame Horse Mode." In fact, according to his Twitter page, he's shocked at the number of people who have unlocked this mode so far. It won't do you much good, anyway, as the game doesn't record scores earned in this mode.

We'll have to wait and see what actually lies on the other side of the hill, as nobody has yet accomplished the feat. With that in mind, if you'll excuse me, I have a hill to fail at climbing.