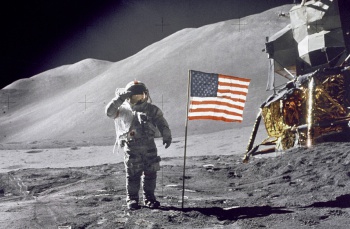 NASA has greenlit funding for a host of projects that make Curiosity look pedestrian.

With the Curiosity rover safely installed on the surface of Mars, the future has never looked so bright for the legions of prospective space-devices vying to crowd the rover's spot in the annals of human history. To brighten their futures even further, NASA's Innovative Advanced Concepts (NIAC) Program this week awarded generous funding to twenty-eight such futuristic projects. The roster of winners includes a submarine designed to explore Jupiter's moon Europa, a robot that wants to landsail across the surface of Venus, and a device that could be used repurpose the solid parts of waste water as radiation shielding. That's NASA, baby.

The projects were split into the categories of "Phase I" and "Phase II," with Phase I ideas being brand-new projects that were awarded $100,000 for one year each. The Phase II projects, of which there are ten, are described as former Phase I projects that stand ready for development. They'll receive $500,000 for two years.

Unsurprisingly, the more outlandish projects are found in the Phase I awards, including the landsailer that plans to "sail" across Venus using the planet's electromagnetic fields. We also find in Phase I something called "Water Walls," a concept where fecal matter, urine, and other such undesireable material is removed from waste water and repurposed as radiation shielding. Another winning project aims to build an air purification system that contains no moving parts.

Phase II is the home of slightly more developed projects, including the amazing-sounding V2Suit. The V2Suit is a spacesuit kitted out with an astounding array of gyroscopes, accelerometers, and associated gadgetry fitted into the limbs and body of the suit itself. The data provided by these devices will be used to instruct flywheels integrated into the suit to apply resistance to the astronaut's movements, replicating Earth-like gravity even in conditions of zero- or micro-gravity.

"These selections represent the best and most creative new ideas for future technologies that have the potential to radically improve how NASA missions explore new frontiers," said Michael Gazarik, director of NASA's Space Technology Program, commenting on the awards. "NASA is taking the long-term view of technological investment and the advancement that is essential for accomplishing our missions. We are inventing the ways in which next-generation aircraft and spacecraft will change the world and inspiring Americans to take bold steps."

Sadly, when Gazarik says "long-term," he means it: None of the weird and wonderful projects that received NIAC funding this year are expected to go anywhere near space for at least another ten years or so. Still, that doesn't mean that they won't head out to give Curiosity a run for its money at some point in the future. Dream big, right? Dream big.