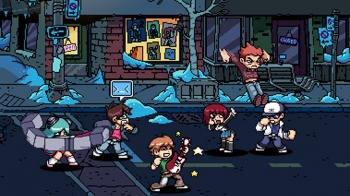 The upcoming DLC for Scott Pilgrim vs. The World adds Wallace Wells as a playable character.

The summer of 2010 was all about Scott Pilgrim. The long-anticipated sixth book in the graphic novel series was finally released, a film adaptation made its way into theaters, and a downloadable game based on the unlucky-in-love twenty-something's adventures was made available on Xbox Live Arcade and the PlayStation Network. Nearly two years after the game's release, Scott Pilgrim vs. The World: The Game is getting new downloadable content, which will add online multiplayer to the XBLA version of the game.

Due out on August 19, the DLC will be available for 400 Microsoft points. In addition to online multiplayer, it also includes a new playable character: Scott's roommate Wallace Wells. Wells is the game's second downloadable character; the first, Knives Chau, was made available a few months after Scott Pilgrim's release.

It's unclear if the DLC was released to coincide with the hardcover, full-color re-release of Scott Pilgrim's Precious Little Life, due out tomorrow, or if the timing is accidental. Either way, Xbox 360 owners will soon have a reason to revisit the retro world of Scott Pilgrim. There's no word on whether the content will be made available for the PlayStation Network, which is odd since the game and the Knives Chau DLC were available on the PSN first.