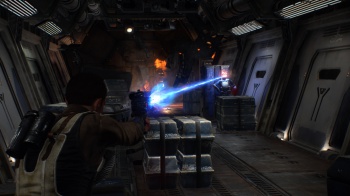 The next decade may make game visuals "indistinguishable from reality."

Industrial Light & Magic is one of those rare companies that sets a lofty goal with its name, and then lives up to it. ILM has produced visuals for some of the most memorable adventure stories ever told, and have come as close as anyone to producing outright magic on film. In fact, ILM is even lending its talents to the upcoming Star Wars 1313, ensuring that one of the most creative Star Wars games in recent memory will also be one of the best-looking. As good as the visuals for the game may be, though, ILM believes that within a decade, videogame graphics will take another leap forward, this time straight into the realm of photorealism.

Kim Libreri, an ILM visual effects supervisor working lending his expertise to Star Wars 1313, believes that the next ten years will bring graphics that are "indistinguishable from reality." Libreri explains that the last decade moved videogames from a somewhat rough visual paradigm to one that can match big-budget animated features. "The way it's going," he says, "it's gonna be pretty hard to tell the difference between something that is interactive and rendered in real time, and something that was done for an animated TV show, or even a live-action thing."

Libreri is not the only gaming personality interested in photorealistic graphics lately, although unlike 2K Games, he does not pass a value judgment on this potential advancement. Photorealistic graphics may not be necessary to reach the zenith of emotional gaming experiences, but they could certainly prove to be a useful tool, and ten years seems like a reasonable timeframe. When the time comes, though, be sure to set some money aside; you're probably going to have to shell out some serious dough for a new console or a hefty PC upgrade. No one ever said graphical fidelity came cheap.