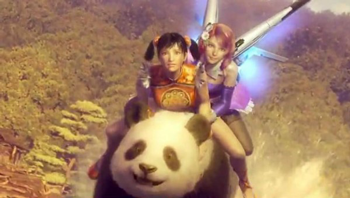 Sony, Microsoft, and Nintendo could team up to compete in the changing market.

Harada San, the man behind fighting game mainstay Tekken, may have based his game design career on constant, brutal competition, but he favors cooperation and collaboration in real life. Take his view on console gaming, for example. He believes that a broadening media market has made videogame consoles just one more device that can play host to a wide variety of entertainment. By pooling their resources instead of fighting over an increasingly narrow niche, San argues that Sony, Nintendo, and Microsoft could create an unparalleled core gaming experience.

"People are able to not be tied down by consoles," says San. He explains that game developers used to compete only amongst themselves, but now must compete with the broader market that includes phones and tablets as well, most of which feature a fairly robust gaming component. "And it doesn't stop with phones, we have browser gaming and all these different platforms." If, on the other hand, the three biggest names in console gaming joined forces, each company could bring something unique to the table and focus on unique gaming experiences instead of competing hardware. "I think it would be interesting if Sony, Microsoft and Nintendo got together just to make one console. It makes me very happy to think about all the possibilities that could occur because of that."

The big three console manufacturers are not likely to jump into bed with each other any time soon, but given the increasingly stiff competition from phones, tablets, browsers, and streaming services, they may eventually decide that cooperation is better than extinction. Twenty years ago, the idea of Sega and Nintendo teaming up was beyond anyone's wildest dreams, and yet here we are.