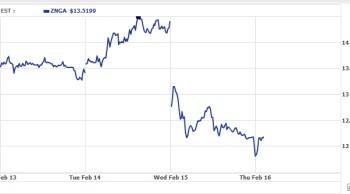 Zynga is offering a one-shot financial incentive to keep almost 3,000 workers from walking out.

Zynga's ship is barely staying afloat in a sea of poor earnings as it gets assailed by lawsuits and allegations of shady financial deals. Recently, one of its key board members was stripped of his responsibilities and has subsequently chosen to leave the company. Employees at Zynga are certainly feeling the pressure now, and may also be contemplating looking for more stable employment elsewhere. In a bid to stop the company's workers from leaving overnight, Zynga has offered stock options to all its full-time staff.

The change came shortly after the lacklustre earnings report on July 25th that sent the company's share price tumbling to lows of $3 per share - a fall of approximately 70% compared to its initial opening price. Normally, Zynga would award company stock options and cash bonuses to its workers each quarter. In light of its dire situation, however, the decision was made to give stock options to approximately 3,000 workers that are still on Zynga's payroll.

Arvind Bhatia, an analyst for investment banking firm Sterne Agee & Leach Inc., has given the temporary reward scheme a nod of approval. "It's a proactive move to prevent mass exodus," he said. "It's positive for morale and I think it's the fair thing to do."

There are still doubts as to whether the options will have any substantial value for the workers. Several employees who joined before the company went public were paid in "restricted stock units", which prevented them from being cashed in until certain conditions are met. As a result, the shares were at the mercy of the market, unable to be touched as their value declined. The lock-up period on 150 million shares will expire on August 16, which will most likely trigger a mass sale as workers attempt to cash in their stock before everyone else.