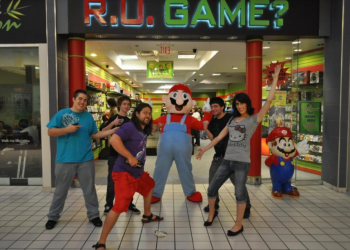 A 29-year-old Florida man sells his entire life, including a massive Halo collection.

What would you do if you wanted to retire? Quit your job would probably be a first step, and Shane Butcher has decided to do just that. Except that he owns his job - and a chain of three R U Game stores - so it made sense to him to sell them on ebay instead. His stores, his sports car, his waterfront condo, his collection of classic video games; it's all going in one big ebay bundle, current asking price $3.5 million.

If you do take on this mini empire, you don't just get a few brick-and-mortar money pits. You get Butcher himself for 6 months, acting as your mentor in the wicked ways of retail. "You will be taught the ins and outs of the business," Butcher promises, and he also says he'll handle all the paperwork and pay the first year's lease and taxes on the properties. "All employees have agreed to give 110% in helping the new owners with the transition," says Butcher.

"There's a lot of things we haven't seen or gotten to do while we've been working so hard to grow the business," said Butcher when asked why he was selling off his life at the grand old age of 29. "We'd like to see the landmarks throughout the country, the Grand Canyon, stuff like that. We'll probably buy a camper and just travel for a while, go see some family."

He admits he isn't likely to see $3.5 million in the current economic climate, and if worst comes to worst he'll stay in Florida and keep control of the business. But if there happens to be some willing soul out there with $3.5 million to spend, Shane Butcher has a gaming empire he'd like to sell you.

Christmas Behind The Cash Register Sean Sands 6 Comments
Comments on