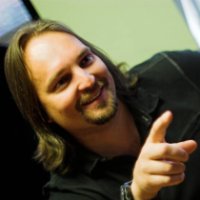 Greg Zeschuk is out of Austin, but not out of BioWare just yet.

Just bringing up BioWare's name can cause a tempest in a teapot, so just imagine what would happen if one of its co-founders up and left. Some sharp-eyed fans noticed that Greg Zeschuk, one of the two men behind BioWare, left his position at BioWare Austin back in May and left only the vaguest forwarding address, prompting speculation that he was getting ready to leave BioWare EA entirely. Luckily, the internet can remain a peaceful place for a little while longer. While Zeschuk has indeed returned to his native Canada, his reasons for doing so are fairly benign, and he is by no means done with BioWare yet.

Zeschuk handed the reins of BioWare Austin, the Texas studio behind Star Wars: The Old Republic over to Matthew Bromberg back in May, but this had less to do with business reasons than personal ones. "My time in Austin was always planned to have a finite endpoint (my family was still living in Edmonton throughout my time in Austin)," wrote Zeschuk in an e-mail to Gamasutra. According to Zeschuk's LinkedIn page, he spent June 2010 to May 2012 there, and after two years away from his family, he was eager to get back to them. Zeschuk has since returned to Edmonton, Alberta to work at the central BioWare studio, and while his role there is not as well-defined as in Austin, he is still very much at work. "I will be able to spend more time on a wider range of BioWare games rather than focusing on just one as I did with SWTOR."

For now, BioWare fans can look forward to many more games under Zeschuk's oversight, although these days, that's likely to make just as many gamers upset as pleased.