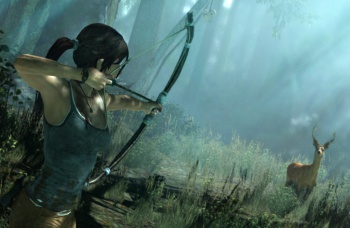 Origin stories can be a real drag, especially when you already know the outcome. We've seen Peter Parker get bitten by a mutated spider more times than we can count, and the story of a young alien named Kal-El has achieved downright mythic status. Even a well-worn origin story can be interesting in the right hands, though. Just take a look at Batman Begins and Casino Royale; Crystal Dynamics sure did. In its upcoming Tomb Raider reboot, Crystal Dynamics took inspiration from James Bond and Batman to learn how retelling an iconic hero's origin story can make it ring true for a modern audience.

"We knew we were facing a problem with a franchise that, at the point of starting development, had been around for 13 years," says Darrell Gallagher, head of Crystal Dynamics. "We knew that to stay relevant we had to change." According to Gallagher, Lara Croft has been a popular and recognizable character for most of her onscreen tenure, but not always a relatable one. The gaming population wants to see Lara as more than just an action hero, and Crystal Dynamics looked to the silver screen to see how other characters handled this transition. "We looked at Batman and Bond and said: 'Wow, they've really done a great job.'" While Lara is not the first character to undergo a major reboot, Gallagher believes that other characters will see similar reinventions in the near future.

Given some of the controversy surrounding Lara's latest adventure, this information could help contextualize the decisions Crystal Dynamics made regarding her character development. Not every franchise reboot needs a gritty backstory, but clearly, having one hasn't done any harm to two of pop culture's most enduring protagonists.