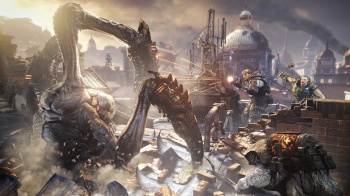 People Can Fly has sold its remaining shares, losing three senior employees in the process.

Epic Games acquired a majority share of People Can Fly, developers of Painkiller and Bulletstorm, in August 2007. Now, it has acquired the rest of the studio - the remaining shares of the Warsaw-based developer have been sold. The decision led to the departure of three senior employees from the studio, including People Can Fly founder Adrian Chmielarz. Mark Rein, vice president of Epic Games, assures that the changes will not affect People Can Fly's current project, Gears of War: Judgment.

"We doubled down on People Can Fly," said Rein. "It was something we always hoped to do."

"We had a controlling stake, but the owner still owned a fairly large piece of it," Rein explained at GDC Europe. Those owners turned out to be the developers who parted ways with the company after the deal. "They left, they're gonna do their own thing. They have something cool they're gonna do, and we'll be very supportive of it."

Rein said that the developers parted amiably. Chmielarz seems to hold no hard feelings either, tweeting, "Gears fans, you're going to love Judgment. It's in great hands. And don't worry, you'll hear about my plans soon enough."

People Can Fly got started by developing Painkiller (notable for its shurikens and lightning). Its first project with Epic was the PC port of Gears of War. Afterwards, it assisted development on the Gears of War console games. Most recently, the studio was given the task of developing the upcoming Gears of War: Judgment, due to hit shelves March 19, 2013.