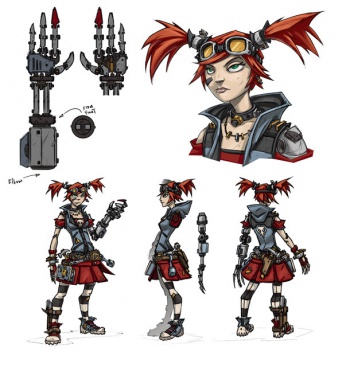 Gearbox Software's Borderlands made waves with its blend of first-person shooting and heavy RPG elements, but the mixed genres left some players isolated. What if your co-op buddy loves the Diablo-style loot progression but can't aim a pistol to save their life? Gearbox may have a solution in the form of a casual-focused skill tree for the game's planned fifth character class, the Mechromancer.

"The design team was looking at the concept art and thought, you know what, this is actually the cutest character we've ever had," said lead designer John Hemingway. "I want to make, for the lack of a better term, the girlfriend skill tree. This is, I love Borderlands and I want to share it with someone, but they suck at first-person shooters. Can we make a skill tree that actually allows them to understand the game and to play the game? That's what our attempt with the Best Friends Forever skill tree is."

The Mechromancer will have a few ways to make the frenetic combat of Borderlands more accessible. One of the first skills in the tree, Close Enough, causes bullets that miss enemies to sometimes ricochet off walls and other objects towards the bad guys. A gameplay preview of the Mechromancer saw her using this ability to keep herself behind cover, spraying bullets in the general direction of the enemy and still scoring hits. The tree may also make use of her pet robot, Deathtrap, who can be summoned to draw enemies' attention from the player.

Best Friends Forever is currently the Mechromancer's only finished tree, but Hemingway mentioned that he would like to try using another of her trees as a counterpoint to the casual aspects of BFF. "Right now, I'm thinking of it as a hardcore mode. So if you are a really expert player, and you want to do some tricky, difficult things, this is the tree for you, for just a totally different experience. We're not ready to talk about it, because we have no idea if it's even going to pan out. But we've got some interesting ideas there."

Hemingway thinks the Mechromancer's third skill tree could be based around lightning and shock weapons. "It's all about shields and electrical damage," he said. "We've never really had an electrical-themed character skill tree. So that's exciting to me."

The Mechromancer is planned to launch about 60 days after the release of Borderlands 2, which itself is expected to be out on September 18. Players will be able to add her to their team via DLC for an unannounced price, though it's free to anyone who pre-orders the game.

Gallery of the Day: 8 Pirates from Videogames That Arr Awesome DrStrangelove 12 Comments
Comments on