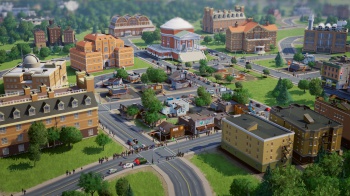 PC gamers can sign up for the SimCity beta starting tomorrow.

It's been many years since a new entry in the SimCity series was released, but that's all going to change in 2013. EA announced a revival of their city-building (and destroying) franchise, which also went on to spawn the mega-popular Sims series, earlier this year, with a PC release date set for 2013. The publisher just confirmed that SimCity will also be releasing for the Mac in February of next year at the same time as the PC version.

While release dates for Mac versions of PC games used to lag behind (if they happened at all), EA has been a supporter of Mac users in recent years, releasing The Sims 3 for both on the same day in 2009. SimCity for the Mac will be available as a digital download through EA's Origin service.

Those who can't wait to unleash natural disasters on their cities can sign up for the SimCity beta starting tomorrow, which is when the page will go live. Beta testers will get a chance to check out the game before it's released, though it's limited to PC gamers only.