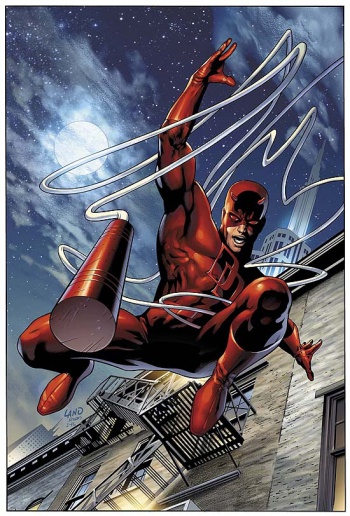 Fox's attempt to produce a new Daredevil motion picture fell through at the last possible moment.

In the old days, when a studio thought they could make a profitable superhero movie, it would need to license exclusive film rights from the copyright holder or comic book company that owned them. Fast forward to today, and comic book companies like Marvel now have access to movie studios of their own, and can directly support their own versions of the stories and characters. This doesn't bode well for any studio whose licenses are nearing their expiration dates, at which point they would revert back to Marvel to be produced entirely in-house. Such is the case for Fox's film rights to Daredevil, which according to Deadline slipped through the studio's grasp when Fox neglected to greenlight a pitch by director Joe Carnahan.

To prevent the rights from expiring, Fox would need to have a Daredevil movie in production by October of this year, which required the project to be greenlit this week. The Grey director Joe Carnahan was in talks to do just that, but considering that Fox's last take on the character failed miserably, the studio was understandably reluctant to develop anything other than a guaranteed moneymaker. "I think my idea for a certain retro, red-suited, Serpico-styled superhero went up in smoke today kids," Carnahan tweeted yesterday. "DD pitch was tremendous and everyone flipped for it. The clock ticked down at Fox, that's why it went tits up."

As the cinematic Marvel Universe continues to grow, it is in Marvel's best interest to regain many of their licensed film rights. Fox and Sony are unlikely to release the rights to their X-Men and Spider-Man properties anytime soon, but less popular franchises could easily make the transition to Marvel Studios, like the rights to Blade that recently expired for New Line.

While a Fox-produced Daredevil is no longer an option, perhaps Carnahan will get a chance to pitch his concept to Marvel's producers. It was his hope to adapt Frank Miller and David Mazzucchelli's Born Again, a street-level crime storyline in which the Kingpin discovers Daredevil's secret identify, into a full-fledged motion picture. Carnahan has since released video versions of his pitch on YouTube, including the one embedded below and an NC-17 version.

Take My Money: Are You Ready For The Next Daredevil Season? TrishaHershberger 2 Comments