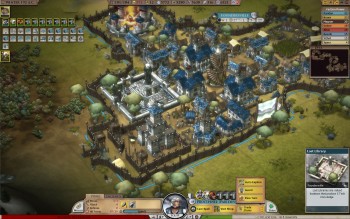 Stardock is now blaming a former marketing manager for the disastrous launch of Elemental: War of Magic.

The 2010 launch of Elemental: War of Magic was an absolute train wreck, but to Stardock CEO Brad Wardell's credit, he didn't try to dodge any bullets. He called the launch of the game a "complete fail" and said that the studio showed "blindness" and "poor judgment" by releasing it in the state it was in, and then compensated gamers a month later by offering the first two expansions at no charge to anyone who'd purchased the original game. It was, and is, a mess - aggregate score of 53 at Metacritic - but Stardock took the heat and did what it could to make things right.

Which is why it's a bit surprising that the studio has now filed a lawsuit for more than $1 million against Alexandra Miseta, who had been Stardock's marketing manager for more than three years prior to the launch of the game. On August 3, 2010, however, she quit the company without notice - but roughly three weeks before that, according to the suit, she destroyed all Elemental-related marketing materials, analytics, trade show information and other related data.

Stardock claimed it cost more than $5000 to assess the damage done by Miseta, but worse, her sabotage short-circuited marketing efforts and diverted valuable resources away from the game. "Plaintiff had to spend vital time leading up to the release of Elemental attempting to re-create the Elemental Materials, rather than programming, debugging and otherwise readying Elemental for release," the suit says. "As a result of the loss of the Elemental Materials, and the detraction from programming, debugging and other responsibilities, Elemental was unsuccessful in the marketplace, earning a fraction of its anticipated profits and causing Plaintiff damages of over $1,000,000."

Almost as an aside, the lawsuit also notes that Miseta ran "several side businesses" during her Stardock work hours and refused to return her company-supplied laptop when she quit.

The suit may not be without merit, although what would cause a previously loyal employee who Stardock acknowledges had "prepared similar materials for the launch of several other games.... all of which were commercial, professional and financial successes" to suddenly turn to the dark side, set everything on fire and join the forces of the laser skin care industry is completely beyond my reckoning. But regardless of that, the sudden effort to tie the actions of a rogue marketing manager to a multitude of bugs, poor documentation and other game-related issues is baffling.

"Elemental's launch is the result of catastrophic poor judgment on my part ... EVERY competent software developer knows that the programmer must never be the one deciding whether the program is done. Yet, my love of Elemental broke my self discipline and I began coding on the game itself in vast amounts and lost any sense of objectivity on where the game's state was," Wardell said in his 2010 mea culpa. "I normally only program the AI on our games so I can keep a level of distance from the game itself to determine whether it's 'Ready'. On Elemental, I was in love with the world and the game and lost my impartiality."

And yet now the finger is pointing in another direction. A bit odd, to say the least. Stardock is seeking damages in excess of $1 million, plus costs, attorney fees "such further relief deemed justified by the Court." Stardock's complaint against Miseta can be read in full at PDFCast.org.

The Day One DLC Trap Shamus Young 133 Comments
Comments on