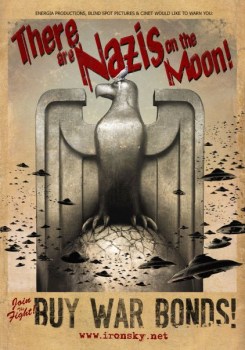 The Nazis from the dark side of the moon are coming to your console.

Iron Sky, in case you've somehow missed all my excited rambling about it over the past year or so, is a made-in-Finland film about Nazis who escape to the moon at the end of the Second World War and then stage an invasion of Earth in 2018. It stars a bunch of people you've never heard of plus Udo Kier, whose presence should tell you all you need to know about this flick - in case the whole business about Nazis from the dark side of the moon didn't do the job for you.

Anyway, Iron Sky the film is now on its way to becoming Iron Sky the videogame thanks to a deal between director Timo Vuroensola and German publisher Topware Interactive, which announced the forthcoming Iron Sky Invasion at Gamescom. There isn't much in the way of detail at this point but the game will follow the plot of the film, with players strapping in as pilots for either the invading Nazis or Earth's defense force in a great battle in outer space.

Iron Sky Invasion is being developed by Polish studio Reality Pump, whose previous work includes the Two Worlds and Earth franchises, and while I rarely (okay, never) hold out much hope for movie-to-videogame translations, this one at least has my interest. As with Iron Sky itself, the concept is so brilliantly cheesy that I can't help but think - and even dare to dream - that it might just work out to be awesome.

Iron Sky Invasion is slated to come out in November in both a standard and special "Gotterdammerung" edition for the Xbox 360, PlayStation 3, PC and Mac.