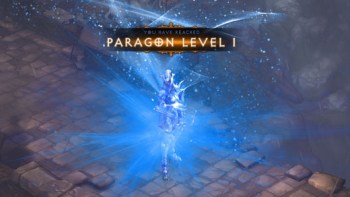 The new Diablo III "Paragon system" will give high-level players something exciting and new to strive for: even higher levels!

The trouble with Diablo III, so it would seem, is that once players hit level 60, there's just not much left for them to do. All that remains at that point is to hack and slash in search of loot, but as Blizzard admits, "Your play session may not only end without an upgrade, it can wind up being a net loss." And that's just no good.

Fortunately, in an inspired stroke of genius, the studio has come up with the solution to hitting the level cap: more levels! "Paragon levels," to be precise, a sort of tier-two level set that kicks in once character level 60 is achieved. Paragon levels are earned the same way as conventional levels - kill monsters, gain experience - and, much like regular levels, boost core stats like strength and dexterity, but they also increase Magic Find and Gold Find attributes by three percent per level.

This is apparently the big deal: Instead of forcing players to improve their odds of a big score by swapping into Magic Find gear in the middle of a fight, Paragon levels will effectively turn that percentage into a skill. Blizzard is also capping the Magic and Gold Find percentages at 300, meaning that someone at the maximum Paragon level of 100 will also have the maximum Magic and Gold Find percentages without needing special gear and can therefore focus on using items with more practical, combat-specific bonuses. "The idea is that if you're currently swapping gear in and out for the Magic Find bonuses, you can continue to do so... but gain enough Paragon levels, and you won't need to anymore," Diablo III Game Director Jay Wilson explained.

"To support the new system, Nephalem Valor (NV) will now also provide a 15 percent experience bonus per stack, applicable toward Paragon levels. The first Paragon level should take about as long as it took most players to get from level 59 to 60, and the experience requirement will rise from there," he continued. "The time to reach the upper Paragon levels approximates the long-term time investment required to get a level 99 character in Diablo II."

The Diablo III Paragon system, which will also reward high-level players with an increasingly-fancy-schmancy series of borders around their character portraits, will be released as part of the forthcoming 1.0.4. patch.