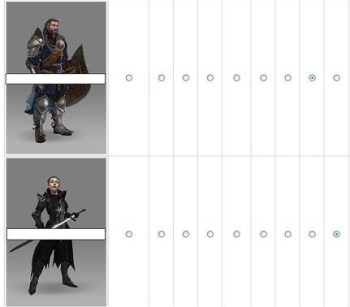 A BioWare Social Network user claims to have seen the future of Dragon Age 3.

Okay, let's get the obvious thing out of the way first: Technically speaking, Dragon Age 3 doesn't actually exist. Nobody from Electronic Arts or BioWare has ever come out and said, "Yes, we are working on a new Dragon Age game." And with that said and duly dismissed, we may now direct our attention to BioWare Social Network user "Earthborn_Shepard," who claims to have taken a survey that dropped the dime on the next Dragon Age game.

Dragon Age 3 reportedly takes place during a time of trouble in the powerful nation of Orlais. The Templars have broken away from the Chantry, the Mages are rebelling and the world is on the verge of collapse. And then things get really bad.

"A portal between the worlds unleashes hordes of demons in the land, civil wars rip apart nations and the corruption is limitless. Someone is behind the shadows, drawing the threads which destroy the world. Time has come for the Inquisition," according to the plot synopsis, translated from the survey's original German by the wondrous magic of Google. "Take the Inquisitor's cloak and lead the only force able of bringing light into the darkness. Choose the direct method and gather your armies, send spies into the shadows or engage in a political war, make friends and use your connections indirectly: it is up to you how you lead the inquisition. But you'll have to take lead of it from the beginning. Make your player a rogue, warrior or mage and set up your crew from up to ten (!) complex companions to lead them against those who attack you by systematically spying on, revealing and destroying them."

The survey also apparently made mention of a number of potential additions and improvements to the new game, including special finishing moves, lots of "crucial decisions" to be made, better party management with support for up to four companions at a time, and perhaps most interesting of all, online co-op gameplay. It also included links to concept art for in-game characters and companions, and asked what respondents thought of some possible titles:

It's all purely rumor and could very well be nothing but a bunch of home-cooked nonsense, and at least one related thread has since been closed by a BioWare moderator as a "troll thread." But there's enough info dumped to give it at least a veneer of credibility, too. Is it? Isn't it? I don't know. But if it is, I hope they can come up with a better name than the options on offer. Throne of Shale, maybe?