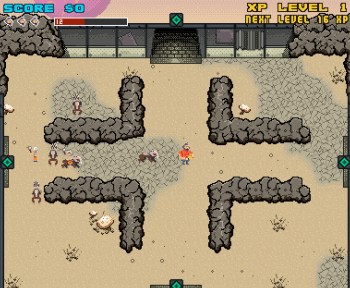 The Borderlands of 1989 looks just a little bit different than the game we know and love today.

1989 was a heck of a year. Milli Vanilli was at the top of the charts, George Bush was elected as President of the United States and the very first iteration of Borderlands was making a big splash at arcades across the country and, for those lucky enough to have them, on 16-bit home game consoles. It wasn't the Borderlands as we know it today; the first-person revolution was still years away, after all. But it was violent, it was bloody and it was packed with guns of all sorts and freaky enemies at which to point them.

That's all a bunch of nonsense, of course (except for the Milli Vanilla and George Bush parts), but with Borderlands 2 less than a month away, Gearbox has "demade" the game into a classic 16-bit top-down shooter. It's a simple business: move up, down, left and right, kill everything you see and try not to get stuck with a gun that sucks. Three lives, crappy sound effects and a high-score board - all that's missing is an ashtray beside the joystick and a burly change guy named Warren.

The Border Lands features the four new characters who will appear in Borderlands 2, although from what I can see there's no actual difference between them in this particular version of the game. There are plenty of "classic" enemies to kill, though, including Skags, Rakks and those creepy little midget dudes who make the funny noises. Man, I hate those guys.

I managed to reach 127th place on the high score charts, although I've probably been forced down since. Think you can beat that? You can't, but you're more than welcome to waste your time trying at wubwub.eu.