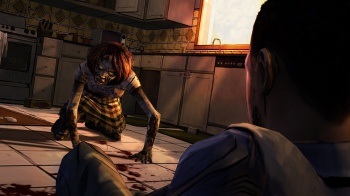 Those of you who, like me, prefer the iPad for some gaming experiences have had reason to moan like a two-week-dead zombie for a while now. Though Telltale's point-and-click adventure game Walking Dead: Episode 2 - aka Starved for Help - has been out on Steam and consoles for what seems like forever, only the first episode was available on the iPad. That will change as of next week, when Starved for Help comes to the iStore.

"How will you get ready to hop back into Lee Everett's blood-stained shoes on iOS?" Telltale asks. At the end of the last episode, the survivors were hiding out in a motel awaiting rescue. Help never comes, and in this one you'll have to take some chances to get food and better shelter for the group. Even hardened cynics claim Starved for Help is better than its predecessor, and now iPad owners can find out how much better.

The new episode is available as an in-app purchase for $4.99. If you already bought the multi-pack, it will automatically be added to your subscription. Time to sharpen that massive ax you've been saving for emergencies!