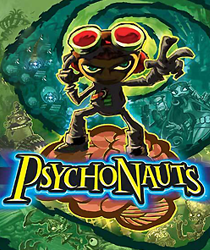 Tim Schaefer's cult classic gets a downloadable release as part of the Playstation Classics program.

When last seen, Tim Schaefer was rolling around in a new money bin built to hold his Kickstarter proceeds. The latest from Double Fine is that its cult classic adventure game Psychonauts will be coming to the Playstation Network as a downloadable title. It will be available as of next week Tuesday, so - in the words of PlayStation blogger and community manager Chris Remo - "Tune up your heartstrings. Clean off your credit card." This comes courtesy of the PlayStation 2 Classic program, intended to bring PS2 titles to current consoles.

Remo went on to say "as it turns out, we do love free money! (Preferably in cash-stuffed envelopes slid under the office door.)." He went on to explain why it had taken so long for the game to get a PSN release: "to truly become a PlayStation 2 Classic, we wanted to ensure Psychonauts had all the time it needed to grow into its status as a classic, like a fine artisanal Tuscan cheese. But less smelly." Psychonauts has been available on the iStore and Steam for a while, but this is the first time it's been available as a PlayStation title since its release in 2005.

Psychonauts, the game beloved by hat-wearing Aussies, features psychic protagonist Raz as he investigates strange goings-on at Whispering Rock Psychic Summer Camp. It was the first game Double Fine ever released, and while critically acclaimed it didn't break any sales records. However it attracted enough of a dedicated following to keep it going, and is still one of Double Fine's best known titles. Incidentally for those wondering, Schaefer is still hard at work on his Kickstarter project ... but that's a story for another day.

UPDATE: Clarification: Chris Remo, described as a PlayStation blogger, does not work for Sony. Remo is a Double Fine employee.