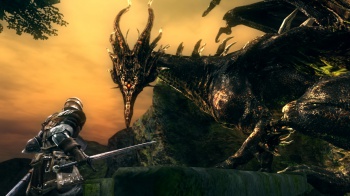 A graphics issue From Software couldn't fix in a year took one enterprising NeoGAF user less than half an hour.

If you're a PC gamer, it's easy to feel like you're getting a raw deal compared to your console brethren. If it's not the lenghty wait before the PC version of your game is released, then it's the frustrating bugs and graphical issues that the console editions don't seem to have. The problem is that unlike consoles, no two computer configurations are alike, so PC developers need either time to code and test their software, or they need to cut visual features to make the release date. Such was the case with the Dark Souls: Prepare to Die PC port, which sacrificed higher resolutions and other graphical fixes so that the game could be released this year. Which made it all the more surprising when NeoGAF user Durante was able to whip together his own resolution fix within 23 minutes of release, and made it available online for everyone to enjoy.

"It's an interception d3d9.dll that you place in the same folder as the game executable," Durante writes on the NeoGAF forums. "It intercepts the game's calls to the DirectX 9 API and changes them as necessary to enable a higher internal rendering resolution."

To be fair, Durante did have more than a half hour to work on his Dark Souls fix. In the week leading up to the release, he prepared the dll framework that would allow him to quickly enhance the game's 1024x768 resolution when he could finally get a hold of the game itself. Durante notes that he's only been able to test the first half-hour of Dark Souls on his system, but GameSpy is also reporting 2048x1440 resolutions with no anti-aliasing, and the fix even restores some blurring problems players were reporting.

Anyone looking to try out Durante's fix can find it here. If the problem really is that easy to correct, hopefully developer From Software will have an official fix out in the near future.