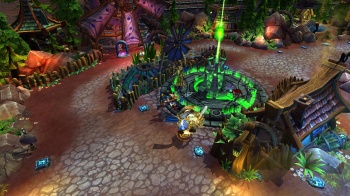 The two teams planned to split the prize money.

Competitive gaming is growing apace, with professional tournaments in console shooters like Halo Reach and PC strategy games like StarCraft II proliferating across the world, but it seems that pro gaming is just as vulnerable to cheating as physical sports are. Major League Gaming discovered the final two League of Legends teams left in the Summer Championship tournament this weekend in Raleigh, NC were "colluding" to split the final prize money - that is, one team would let the other win and after the event split the cash 50-50. Instead, the two teams - Curse NA and Team Dignitas - will not win any prizes, will not earn Circuit points from LoL Riot Games, and be known forever as jerks.

MLG regrets to announce that we will not be awarding 1st or 2nd Place finishes for the Summer Championship League of Legends Event. We have determined that there was collusion between the two final teams, Curse NA and Team Dignitas. This is in clear violation of both the letter and spirit of MLG's Official Pro Circuit Conduct Rules: 'competitors may not intentionally Forfeit a Game or conspire to manipulate Rankings or Brackets.'

As such, both teams have been disqualified, and no placements or prize money will be awarded.

As I said, physical sports have their fair share of players abusing the sense of fair play for personal gain. From the Black Sox of 1918 throwing the World Series to make gamblers money, to the recent doping mess in cycling and the London Olympics badminton teams colluding to lose matches, it's clear there will always be cheaters and the chance at foul play. The only thing to do is to act as MLG has: acknowledge the wrongdoing, serve a severe but fair punishment, and move on.

Now that MLG is starting to have its own cheating scandals, does that legitimize competitive videogaming? Can we get StarCraft II tournaments on ESPN now?