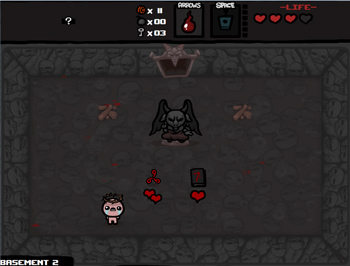 Limitations with Flash necessitate a complete rewrite of the game.

Edmund McMillen's The Binding of Isaac proves that you can turn a profit by making a game about a boy who kills horribly mutated, Freudian-esque creatures with his tears. The developer has revealed that his Flash-based success may soon undergo a full remake to be released on consoles and PC.

McMillen revealed his plans for the rogue-like dungeon crawler on formspring, stating that the remake will most likely be a "Wrath of the Lamb size expansion added to it + more and it wont be out till next year". The project is still in planning, but McMillen aims to release the remake on all consoles.

"The console version of Isaac will feature A TON of new modes, bosses, items, playable characters, co-op and a million other things we couldnt do in the flash version," he said.

McMillen also believes that the remake will be done by a publisher who will rebuild the game using a different engine other than Flash, as McMillen has run into several problems with Shockwave with a game of Isaac's scope. "The flash version cant be updated anymore," he explains. "The file size is so large that it takes 10-15 trys to export a functional swf file.. if we add or edit anything it gets worse and worse and is getting to the point where the fla becomes corrupted every other save.. we cant add anything without breaking EVERYTHING."

Unfortunately, McMillen has doubts as to whether the game's loyal fans will benefit from buying the original. "Seeing as it's a remake made by another company, you'll have to rebuy it. But it's a long way off so don't worry much about it now."