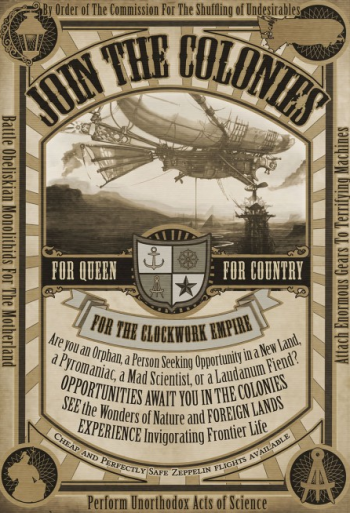 Gaslamp Games wants to make a user-friendly Dwarf Fortress, but with a Lovecraft twist.

It's sad times in the Empire. The Queen is locked up - for her own good or her Prime Minister's is impossible to say - and the Church of the Holy Cog prophesies ruin as it prays for the salvation of the Empire. However there are options; the Colonies offer riches and fame, for those bold enough to emigrate. That is the premise of Clockwork Empires, the latest Windows, OS X and Linux title from Gaslamp Games; or, as Gaslamp sometimes thinks of it, "Dwarf Fortress For Everybody." Plus added Deep Ones, naturally; someone's got to eat those colonists, and this game has a Lovecraft-inspired dark heart.

"Two of the reasons why Dwarf Fortress isn't for everyone right now," said Daniel Jacobsen, Gaslamp CEO, "are the graphics and the user interface. So we're doing things that will allow us to try to get a lot of the functionality through while making it easy enough for people to pick it up." Dwarf Fortress, a roguelike city-builder, put the player in charge of a bunch of somewhat suicidal Dwarves as they attempted to carve out a home for themselves in inhospitable terrain. Clockwork Empires has essentially the same premise, but this time your hapless Soldiers and Poets can fiddle with Tesla science, explore forgotten temples, or encounter fish men and other blasphemous horrors in an environment as far from ACSII art as New York is from Yuggoth. Play it safe, and the colony will reap dividends; explore incautiously, and Elder Gods might take an unhealthy interest in your settlement.

Not that your colonists are safety-conscious. "If you've got a whole bunch of people researching in a building and you just sort of leave them to it and you don't keep tabs on them, there's a high probability that they can start doing evil things and summoning demons or something," says Jacobsen. Failure is an option, but with failure comes medals, promotion and other good things, so the player shouldn't see the destruction of the colony - and the death of all the colonists - as a complete loss.

No release date has been announced yet.