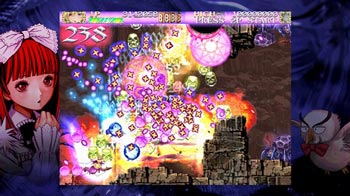 Masahito will be leaving in three months' time, leaving board Chairman, Kenichi Takano, as president.

For those of you not up to date on your savagely difficult scrolling shoot-em-ups, Cave was one of several outfits founded by former Toaplan (the company responsible for "all your base are belong to us" meme sprouting shooter, Zero Wing) developers. Cave's catalogue is a cornucopia of boobs-and-bullets shoot-em-up excellence, including titles like Donpachi, Deathsmiles, Gunwange and Ibara.

Unfortunately, the studio's niche audience combined with the bizarre decision to release shoot-em-ups on the 360 rather than the PS3 - and we are talking about Japan-only games here - have left the company in dire straits. Back in January, lower than expected sales caused the company to lower its earnings predictions from an expected ¥10 million operating profit to a ¥31 million operating loss. That's just shy of 400 grand in US dollars, a minuscule amount for some developers, but a heavy blow to one the size of Cave.