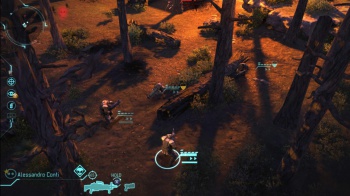 Developers from Firaxis have made first contact with a full hour of gameplay footage.

The X-COM series was infamous for its brutally high stakes and tactical combat. Firaxis Games' current project, XCOM: Enemy Unknown, looks to revive the 18-year-old franchise with some modern updates. Don't take their word for it, though - lead designer Jake Solomon and lead programmer Casey O'Toole streamed a playthrough of two full missions from the campaign so you can see their handiwork for yourself.

XCOM: Enemy Unknown (not to be confused with the other XCOM currently in production) follows the same basic structure as its predecessors. Players control an international organization made up of the world's finest soldiers, scientists, and engineers, fighting an uphill battle against a bizarre alien menace. The gameplay footage consists mainly of two tactical combat missions pitting a small squad of troops against a fittingly unknown enemy.

Many elements of the classic games make a return in the Firaxis reboot, including the cruel combination of individual soldier customization and perma-death. Players will still be carefully positioning troops and comparing accuracy percentages, but don't be fooled - this isn't your daddy's XCOM. Many soldiers in the gameplay demo had leveled up, acquiring perks and custom armor as they increased in rank. The team's designated sniper was equipped with a grappling hook allowing him to zip around the battlefield to ideal vantage points, while a heavy gunner suppressed some hostiles to protect his squadmates. A brief look at the character customization screen revealed a multitude of other options through which to grow attached to your loyal men and women (at least until they inevitably and heartbreakingly take a laser to the face). One thing that certainly hasn't changed is the game's lethality: even the developers were unable to complete either mission without taking casualties, and that was just the game's normal difficulty level.

Armchair generals will be able to assume command when the game launches on October 9 in North America, October 12 in Europe and Australia. Pre-ordering the game will unlock the Elite Soldier Pack as well as the much-adored flat-top hairstyle from the original X-COM. Personally, I'm not sure I could handle watching the death of another trooper sporting that hilarious hair-do - the flashbacks might be too much.