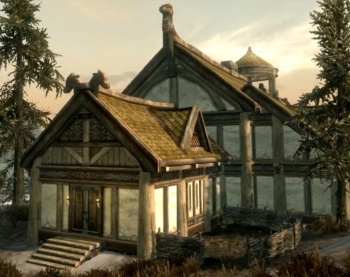 You poor players of Skyrim on the PS3. First you had to deal with the bloated save games that made the game nigh-on-unplayable after several hours of play time. Then there was the backwards-flying dragons of patch 1.2. The gamers who play Skyrim on the PS3 haven't been able to play the first major DLC Dawnguard which came out on June 26th for the Xbox and August 2nd for the PC. Now that Bethesda has announced the next DLC Hearthfire, PS3 owners took to complaining on Twitter and Pete Hines, VP of PR and Marketing at Bethesda responded saying he's sorry the PS3 DLC hasn't come yet. They have multiple teams working on various projects though, so creating new Hearthfire doesn't impact the PS3 coding.

"We are working on multiple projects, even beyond those two things. The entire team doesn't work on one thing at a time," Hines said.

One PS3 player of Skyrim complained directly to Hines that he was disappointed. "We're disappointed too, but we're keeping at it," Hines responded. The player pressed the issue, asking whether making Hearthfire impacts Dawnguard for the PS3.

"No, they are separate things," Hines said.

I feel bad for PS3 owners who are still playing Skyrim and want some extra content. I'm sure it takes development time and money to convert the code to the PS3 and optimize it, but there are customers who want to buy stuff from you, Bethesda. What's the hold up?