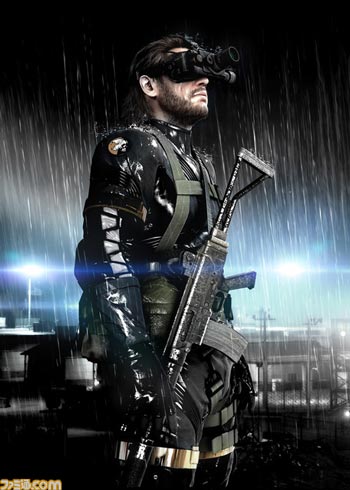 Metal Gear Solid: Ground Zeroes runs on the new Fox Engine and should be arriving this gen.

According to reports from journos attending the Metal Gear Solid 25th anniversary event, Kojima Productions has just announced Metal Gear Solid: Ground Zeroes. There's an embargo in place, so we only have a few scant details, the art shot to the right and few tweets from journos who've seen the game's real-time Fox Engine demo to go on.

The game is said to be targeted at current gen consoles, though the developer has also confirmed it has next-gen projects in the works.

The demo is apparently running on a PC (not unusual at this point in production) and seems to be blowing minds, if the following tweets are anything to go by.

That last tweet is particularly interesting. Though it's difficult to tell because his trademark eye patch is covered by night vision goggles, the character depicted in the art above appears to be Big Boss, not Old/Solid Snake. The old style sneaking suit, dated rifle and the Militaires Sans Frontières emblem on the character's shoulder means we might finally get to see what drove Big Boss from likable mercenary to Machiavellian villain.

Critical Miss: It's Not Cosplay The Wooster 67 Comments

Why is the Main Character in Fallout 4 Voiced? Shamus Young 102 Comments