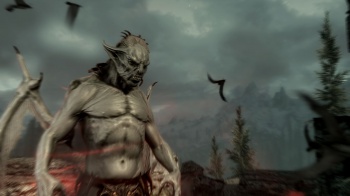 "This is not a problem we're positive we can solve," says Bethesda's community lead.

Bethesda Softworks has given another update on the situation surrounding the upcoming DLC expansions for Skyrim on the PS3, and the news isn't pretty. According to the developer's global community lead, there are issues with the DLC's development which Bethesda isn't even sure it can fix, leading to uncertainty as to whether Dawnguard will ever see the light of day on the platform.

In a post on Bethesda's forums, administrator and community lead "Gstaff" attempted to clarify the situation somewhat. "Skyrim is a massive and dynamic game that requires a lot of resources, and things get much more complex when you're talking about sizeable content like Dawnguard," he said. While he didn't elaborate on what the actual problems with the patch are, he stated that the team is doing everything in its power to try and fix them. "We have tried a number of things," he wrote, "but none of them solve the issue enough to make Dawnguard good for everyone." The team can't afford to put their entire resources into just the one patch, either, as work is also underway on Hearthfire. Due to so many new assets being added all at once, "the issues of adding content get even more complicated."

What's truly worrying is what Gstaff says next: "This is not a problem we're positive we can solve." This is always an ominous admission to make, and no less so here. Bethesda is doing everything in its power to try and solve the issues, though, and to that end the team is working closely with Sony to iron out the last few problems.

Various disgruntled PS3 users have been asking Bethesda's head of PR, Pete Hines, about the status of the DLC via Twitter. One user recently asked whether Dawnguard is actually playable in its current state on the PS3, and Hines responded: "yes, it just doesn't perform well in all scenarios. Some folks would be fine, some would not." It seems odd that the DLC would work properly for some and not for others, but apparently the uncertainty could stem from the game's save system, with Hines saying simply "every save game is different" when pushed for further comment. If this is the true cause of the problem, it evokes memories of the game's protracted lag issues on the PS3 when it launched last year.

The company has nothing more definitive to say about the problem, but here's hoping it will be able to fix the issues it's having soon. Gstaff concluded his message by promising an update on the situation as soon as it becomes available, and thanking fans for their patience in this tough situation. "We deeply appreciate the time and support you have given us, and we'll keep doing our best to return that," he said.