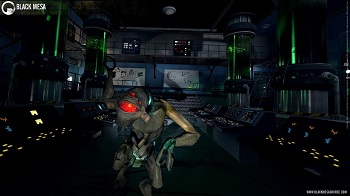 After many years, the fan-made Half-Life conversion, Black Mesa Source will be available to the public.

Half Life 3 might be MIA, but that doesn't mean that the adventures of Gordon Freeman have to end. On September 14, the highly anticipated fan remake of the original Half Life, Black Mesa Source, will be available for download. According to project lead Carlos Montero, this first release will cover everything from the initial tram ride to the Lambda Core. Both the later levels in the alien world of Xen and the classic deathmatch mode will arrive at a later time. Even so, Montero promised that Black Mesa Source will deliver a "complete-feeling 8-10 hour experience with a solid ending".

For the past seven years, the Black Mesa Source project has been painstakingly remaking the 1998 classic as a mod for the more recent Half Life 2. An estimated 40 talented modders have been slaving away, remaking textures, levels, and voice work in higher resolution (and avoiding copyright violations).

Meanwhile, the anxiety-prone among us can take deep breaths and stare at the helpful countdown timer until the proper day dawns.

For an emotional taste of what's to come, the entire Black Mesa soundtrack is available for choose-your-price purchase right now.