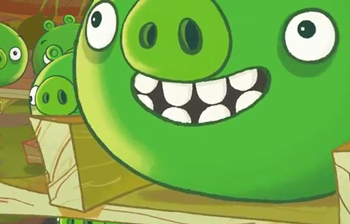 Having briefly stepped away from its ever-popular Angry Birds franchise with the release of Amazing Alex earlier this year, Rovio is now returning to familiar, money-spinning territory. Bad Piggies technically isn't another Angry Birds game, but it is set in the same universe. This time around, you get to play as egg-fond, porcine antagonists, the bad piggies.

Announced with a cringe-inducing pun - something pig is coming - Bad Piggies is due for release on September 27th on iOS, Android and Mac. The game is apparently deviating from the usual hurl-avians-at-structures formula, and Rovio CEO, Mikael Hed, promises the game will be "innovative" and feature "never-before-seen gameplay." Eventually, the title will be ported to Windows Phone, Windows 8 and PC (those last two are apparently separate things now), no doubt to be followed by versions for TVs, consoles, toasters and graphic calculators if the numerous releases of Angry Birds are anything to go by.

"We've had a lot of fun creating a totally new and unique gameplay experience," said Petri Järvilehto, EVP Games at Rovio. "There's so much more to these pigs than what is seen in the Angry Birds games, and Bad Piggies is the first glimpse into what's going on in the imaginative and ingenious minds of the pigs."

While Angry Birds is decidedly "not my thing," mostly because I played pretty much every entry in the throw-stuff-at-stuff genre during Flash gaming's heyday, I'm interested in seeing where Rovio is going with this. Building structures to withstand avian bombardment is my guess, and that actually sounds pretty neat.