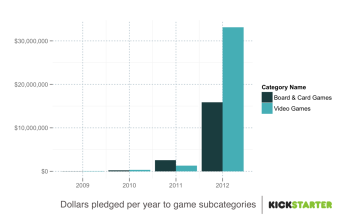 Double Fine credited as inspiring the increase in contributions for games.

Kickstarter has attracted the attention of several game developers, giving them a chance to pitch ideas and secure funding for projects without the need for publishers. Now there are some impressive figures to highlight the service's increased popularity; the company recently released statistics showing that more dollars have been pledged to Kickstarter's Games category this year than any other category on the site.

The blog report revealed that money pledged for videogame and board game projects combined has reached a total of $50 million as of August 31st. This is a huge jump from its 2011 pledge total of $3.6 million, and the year isn't even over yet. The category has overtaken pledges for Film, which trails a close second at $42 million, followed by Design at $40 million.

Kickstarter attributes the rise in game pitches to the funding success of Tim Schafer's Double Fine Adventure, which reached its initial goal in 8 hours, and pulled in a total of $1 million in a day. "Double Fine signaled to game developers that they could use Kickstarter to do something that previously seemed impossible: make the game they wanted without outside interference," the blog post says. It's also worth noting that more dollars were pledged to the Games category each month after Double Fine's project than the previous three years combined.

A breakdown of the category showed that videogames have twice as much money pledged to its projects compared to board games, but board games have more successfully funded projects.

There have been some scares recently regarding the lack of recourse for projects that might fail to deliver, especially in the case of the Ouya console. However, these have since been cleared up, with a representative stating that cash refunds are handled as per Kickstarter's Terms of Service. Even so, Kickstarter's FAQ suggests that all backers make good use of their "internet street smarts" when deciding whether or not to part with their cash.