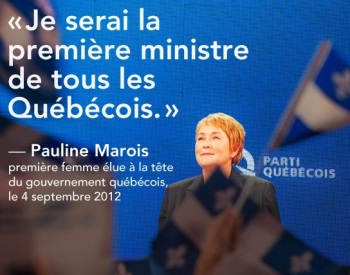 An Eidos Montreal tester has been fired for writing on his Facebook page that he hopes someone kills Quebec's newly-elected premier.

On September 4, the Parti Quebecois, led by Pauline Marois, was elected as the new government of the Canadian province of Quebec. The election led to the usual cross-country hand-wringing, as the Parti Quebecois' raison d'être is separation from the rest of Canada, but the real ugliness came in the form of a nut who tried to murder Marois during her acceptance speech; he missed her but killed audio technician Denis Blanchette and injured three others. The shooter reportedly shouted, "The English are waking up" as he was being led away by police.

Unfortunately, the ugliness didn't stop with the shooting. "You just can't find good assassins these days!" Blake Marsh, a now-former tester at Eidos Montreal, wrote on his Facebook page. In a follow-up comment, he added, "I give this bitch a month before someone with better aim comes forth and does what must be done."

The comments were brought to the attention of Eidos Montreal General Manager Stephane D'Astous, who said there were dozens of emails about it waiting for him when he arrived at the office Wednesday morning. He consulted with a lawyer and then immediately fired Marsh, who had been with the company for four years.

"I think he thought that social networking posts were private matters, but in fact, they're not," D'Astous said. "When you cross the line so clearly, like in this situation, and you associate yourself not just with your person but with your employer, that's totally unacceptable."

Marsh has since shut down his Facebook page, but he may yet face charges for uttering a threat against Marois. "We investigate as soon as we get a report... and if charges can be filed, they will be filed," said Sûreté du Québec Lieutenant Guy Lapointe, who noted that this isn't the only case of online threats the SQ is looking into. "People on their Facebook are posting all sorts of things and they're not thinking of the consequences."