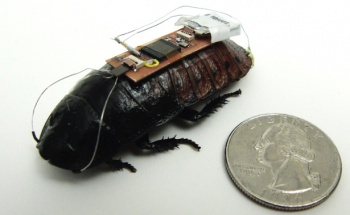 By using sensors to steer cockroaches, the bugs could be used to gather information in tricky environments.

Cockroaches aren't exactly pleasant, but researchers at North Carolina State University have found a good scientific use for the pesky bugs. Assistant Professor of Electrical Engineering Alper Bozkurt and his team have found a way to remotely control live cockroaches by attaching an electronic "backpack" to the bugs, allowing humans to control and steer them. The backpack contains a low-cost chip with a wireless receiver and transmitter, as well as a microcontroller attached to the roach's antennae and cerci.

Creating these "biobotic cockroaches" was a cost-effective alternative to "small-scale robots," which would have been too difficult to produce quickly and efficiently. The biobotic bugs are an electronically safe way to get information from dangerous locations, like an earthquake-destroyed building, and since "cockroaches are experts at performing in such a hostile environment" they're a natural fit for the job.

The wires attached to the cerci, the sensory organs on the roach's abdomen, are used to scare the roaches into thinking a predator is coming from behind, causing the bug to move forward. Meanwhile, the antennae wires are "electronic reins" that cause them to think they've come in contact with a physical barrier, steering them in a different direction. A recent experiment showed that the researchers could effectively steer roaches along a curved line using the microcontroller.

This is a great use for cockroaches, who seem to serve no other purpose than generally being gross. Now, if Alper Bozkurt could make a cat-sized electronic backpack so I could make my cat get me a soda, I'd really be impressed.