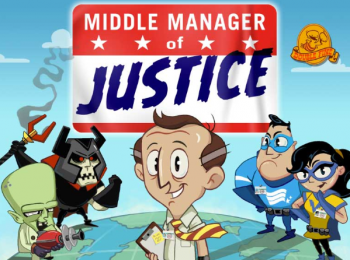 Double Fine has learned that when Apple says September, it means it.

Middle Manager of Justice does not have a launch date, and if by chance you downloaded a copy not so long ago from the App store, congrats! You are now a beta tester. This comes to you courtesy of Double Fine project lead Kee Chi, who submitted the super hero management title to the App store for tentative release in early September. Chi found out too late that when Apple says September, it means it.

When Double Fine realized that more work needed to be done, Chi didn't want to remove Middle Manager of Justice from Apple's submissions queue. That might have meant making a completely new App Store submission, with all the launch delay that implied. Double Fine didn't even know whether Apple would let it launch in September, and certainly never thought Apple would release the game into the wild without telling Double Fine first. Then Chi got a phone call asking, was he aware that the game had gone live, in every territory?

"It wasn't what I wanted the world to see quite yet," said Chi, adding that at Double Fine "we pride ourselves on putting a solid product out there, so having something out there that was buggy and not quite ready yet was really frustrating." In a lemons-into-lemonade epiphany Chi decided to reach out to those who had bought the game, asking players who had spotted bugs to send reports to Double Fine. Double Fine would do its best to make sure that players who had bought early would be inconvenienced as little as possible. Said DF Kee in an official Double Fine message board post, "if you've already have purchased something in game, please note that it will still work when the game is updated. You can keep playing if you wish, but you should really wait for the full release in the coming weeks."

No word yet on an actual release date for this title. Within the next few weeks is as far as Double Fine cares to go at this point.