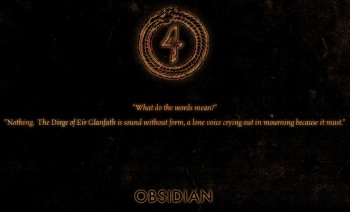 What is "Project X?"

Pop yourself over to Obsidian's website and you'll be greeted by a strange, new landing page: The number 4, circled by an Ouroboros, and a question. "What do the words mean?" it asks. And it answers, "Nothing. The Dirge of Eir Glanfath is sound without form, a lone voice crying out in mourning because it must."

We know that "Project X" is "Obsidian's next RPG endeavor," because it says so on the actual Obsidian site that's behind the landing page. Everything beyond that is just speculation, however, because as the studio explains, the game is "so secret not even its project codename is yet being revealed." Fortunately, a "Speculation and Discussion" forum has been provided for just that sort of conversation.

The prospect of a new, original Obsidian RPG is extremely exciting because while the studio has a reputation, not entirely undeserved, for releasing buggy games, it's also the developer that's given us Fallout: New Vegas, Neverwinter Nights 2 and a couple of expansions, Knights of the Old Republic 2, and, in its previous incarnation as Black Isle Studios, Fallout 2, Planescape: Torment and Icewind Dale. These guys have serious RPG chops, in other words, and bugs or not, when Obsidian makes an RPG, those who know RPGs pay attention.

There's one other hint, found buried in the source of the landing page: "To tenderness, fellowship. To fellowship, vigilance. So bring we all to the Night Market. I am the Spindle of Esenath. Know me by my light and stand with me in darkness." What could it mean?