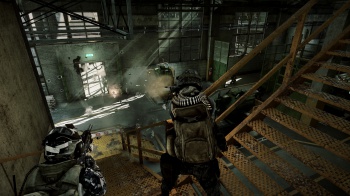 Like most of its big publisher peers, EA is often accused of shying away from innovation in favor of sequels and guaranteed money-spinners. Many argue that the company actually hampers the creativity of the developers it acquires. Not so, according to DICE general manager, Karl-Magnus Troedsson.

"There are those examples that have gone into big products that people don't really know about, but they actually came from smaller, other, more innovative test experiments inside of DICE," he told Gamasutra when asked if DICE gets to experiment with new titles. "In the background of everything, we run a business, of course. But with the success we have had, there are opportunities. It's quite easy for us to explain to upper management that, 'We want to do this. We want to try this out.'"

Since 2002, DICE has released twelve Battlefield titles if you include the various F2P spin-offs. The only non-Battlefield games released in that period were the adventurous Mirror's Edge, Need for Speed: Hot Pursuit and a modern reboot of Medal of Honor.

"And EA is actually very prone to try out new things, and I have to say that sometimes I think we get too much crap for not being innovative," Troedsson continued. "We do release new IPs, and we do take care of IPs that have been out there. And perhaps not so successful, but we try to get new things out there as well."

Troedsson also argues that some players expect an unreasonable degree of change from established franchises, and that effective changes may not always be apparent to non-players.

"Innovation is something that actually changes something for the better, renews something -- and I think we do that all the time," he added. "But some of them are big and some of them are small, and some people disagree, saying, 'That's not an innovation!' and it's like, 'No, maybe not for you, but for the people playing the game it's a big thing,'"

Troedsson does have a point there. Franchises like Pokemon are often accused of being stagnant or lacking in innovation by non-players. However, fans of the series will insist, at great length, that there are huge differences between each installment. Likewise, 2D fighting fans often argue against similar criticism leveled against their favored titles.

While EA has been putting out new IPs as part of its push to break into the "indie" market, the publisher has been mainly sticking with "safe" titles when it comes to traditional retail products. According to EA Labels president, Frank Gibeau, the company intends to rely on its current properties until Microsoft and Sony get around to releasing next gen consoles.