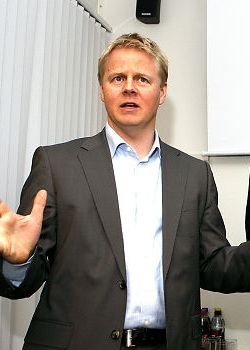 Former Funcom Chief Trond Aas is under investigation for attempting to sell 1.5 million shares in the company immediately prior to the launch of The Secret World.

Funcom's latest MMO The Secret World launched to what some might call a "mixed" critical reception, and it hasn't been a big hit with fans. The company acknowledged in its second quarter financial update that "initial sales of The Secret World have been below expectations," to the point that it was forced to lay off roughly half of its overall staff, including the game's lead designer; its share price has since tumbled from over $17 at the beginning of July to $2.23 today.

That's where it gets ugly for Trond Aas. Funcom announced on July 2 - the day before The Secret World went live - that he had stepped down as CEO and would instead serve as "Strategic Advisor to the Board and Chief Strategy Officer." There's nothing wrong with that, but according to an anonymous insider "familiar with the situation," Aas actually stepped down in order to get off Funcom's "primary insider list," which would allow him to sell his shares in the company without attracting scrutiny.

"As a primary insider, all of Trond's purchases or sales of Funcom shares would have had to be announced to the Oslo Stock Exchange (OSE). After getting off the primary insider list, Trond tried to sell 1.5 million shares," the anonymous source said. "However, his sale was discovered by another shareholder that subscribes to other shareholder lists, and when Trond's sales became public, Funcom's stock price tanked."

Trond was able to sell about 650,000 of his Funcom shares, but is now being investigated by the OSE and Norway's Financial Services Authority. Aas claimed that he has redeemed and sold stock options a few times in the past and that the timing on this sale was purely fortuitous, except for the fact that he's now suspected of insider trading; he also stated that, having resigned as CEO, he knew nothing about the poor sales of The Secret World until the company released a financial update on August 10.

Aas said that "it is human nature to think that 'someone must have known something'," but insisted that feedback on the game up to the point when he resigned as CEO was very positive, so he had no reason to even think about getting out before the wheels came off. "Go back to the week [of launch] to look at the data that was available when the decision was made. There was no [one] at Funcom who [had] different insights than what was communicated [by the users]."

Nonetheless, he could be facing serious trouble."It would surprise me if he is not convicted," the source said, "and he might go to jail."