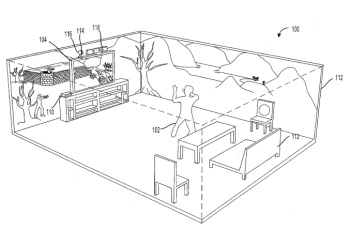 Deep immersion into a videogame is great, but it can be tricky to achieve when you're sitting on a couch 15 feet away from your television. So Microsoft has an idea: expand videogames beyond the limits of conventional screens "by projecting a peripheral image onto environmental surfaces around the user."

"Interactive media experiences, such as videogames, are commonly delivered by a high quality, high resolution display," the company's patent for an "Immersive Display Experience" states. "Even when focused on the display, the user may perceive architectural and decorative features of the room the display is in via the user's peripheral vision. Such features are typically out of context with respect to the displayed image, muting the entertainment potential of the media experience. Further, because some entertainment experiences engage the user's situation awareness, the ability to perceive motion and identify objects in the peripheral environment may intensify the entertainment experience."

Microsoft's planned system would project images throughout the room, using sensors to detect room size, "environmental surface colors," furniture and other obstacles, and then compensate for them accordingly. To avoid corrupting the experience, players would be shielded from the light cast by the environmental projection unit. A sensor could also be incorporated into the system to track head movements and adjust the images accordingly.

As you might expect, a system like this will take some serious processing power to operate, but Microsoft has that base covered too. "Because a user may be focused and interacting with images displayed on the primary display, in some embodiments, the peripheral image may be displayed at a lower resolution than the primary image without adversely affecting user experience," the patent says. "This may provide an acceptable immersive display environment while reducing computing overhead."

There is, of course, not even a hint as to when this bad boy might be ready for market, but it's safe to say that you probably don't want to hold your breath waiting for it.