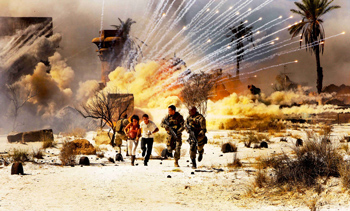 Poor action figure sales mean Optimus Prime may be out of a job.

Transformers: Dark of the Moon didn't impress critics. In fact, the kindest thing I've seen said about it was that it wasn't quite as awful as Revenge of the Fallen. Despite its critical trouncing, the film went on to be the most successful installment in the series and the fifth highest-grossing film in history. Yet, despite the film's success, merchandise sales were down when compared to the previous film. Hasbro thinks the problem is that kids are just sick of Optimus Prime and co.

According to a Hasbro presentation at the UBS Best of Americas 2012 Conference, using the same cast of robots in each film is what's slowing down merch sales. As a result, the company announced that the tentatively titled Transformers 4 will focus on a selection of new robot characters designed to appeal to kids.

While Transformers 4 will exist in the same continuity as the previous three films, it's also being billed as a kind of semi-reboot. Rumor has it that Bay intends to "clean house" and remove the numerous central human characters in favor of literal rather than figurative robot actors.

Hasbro also confirmed that the much-anticipated Stretch Armstrong film (no, really) is on track for a 2014 release, alongside a television series based on the same character. Breck Eisner, of Sahara fame, is set to direct. God have mercy on our souls.