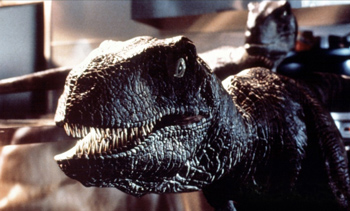 Cameron's take on Michael Crichton's Jurassic Park would have been "Aliens with dinosaurs."

Now that he's made two of the highest-grossing films in history, Avatar director, James Cameron, presumably gets his pick of movie concepts. But there was a time the Canadian director had to fight other directors for projects, and one title that slipped his grasp was Jurassic Park. As Cameron tells it, fellow blockbuster-merchant, Steven Spielberg, beat him to the movie rights for Michael Crichton's best-selling novel by a few hours.

"I tried to buy the book rights and he beat me to it by a few hours," Cameron told the Huffington Post at the recently opened Titanic Museum in Belfast. "But when I saw the film, I realized that I was not the right person to make the film, he was. Because he made a dinosaur movie for kids, and mine would have been Aliens with dinosaurs, and that wouldn't have been fair."

"Dinosaurs are for 8-year-olds," he continued. "We can all enjoy it, too, but kids get dinosaurs and they should not have been excluded for that. His sensibility was right for that film, I'd have gone further, nastier, much nastier."

Despite, or perhaps because of, all the severed limbs and ravenous prehistoric monsters, Jurassic Park went on to be a huge hit with kids. The film spawned all manner of merchandise, a number of theme park rides and over a dozen video games. It also popularized the Velociraptor, much to the chagrin of paleontologists who are forced to break hearts on a daily basis by explaining that the creatures were essentially dorky-looking chickens.

Producer Frank Marshall recently confirmed that Jurassic park IV would be hitting screens within the next two years. The script was written by Mark (writer of The Cell, Thor and the upcoming Mass Effect film) and Jurassic Park 3 director, Joe Johnson is set to direct.

No Right Answer: Who Would Win Everything Forever? Firefilm 22 Comments