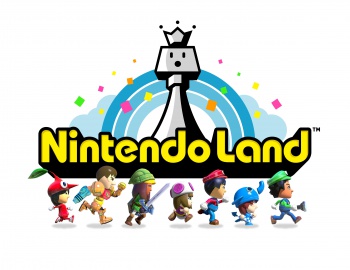 Nintendo invited us to spend another day in Nintendo Land, and we didn't even throw up on any of the rides.

For all the confusion it's generated, Nintendo Land is not that confusing. It's a collection of Nintendo-inspired multiplayer mini-games that Wii U owners will play endlessly just as they did Wii Sports on the Wii. If Nintendo has anything to say about it, anyway.

Nintendo Land mini-games Pikmin Adventure, Metroid Blast, and Mario Chase were all on display at Nintendo's recent Wii U press event in New York City. Considering the obvious target audience, these games are exactly what they should be: fun for the whole family. Each uses the Wii U GamePad in a different, clever way.

I found Pikmin Adventure to be the least engaging of the three, though it may provide a decent adventure for players to journey through. The goal is to make it safely through each level to your spaceship. The GamePad player controls a Mii Olimar with the control stick while tapping the touchscreen to throw Pikmin at blocks and enemies and bosses. Other players use Wii Remotes to control Mii Pikmin as they also attack enemies and break blocks with melee attacks. For a special attack, the GamePad can be used to summon and throw actual players. Collecting nectar levels up your characters from bud to leaf to flower, etc. Maybe I didn't play enough of it, but my Pikmin Adventure playthrough just didn't have much "umph." It was charming, and I laughed when I turned into a colorful pile of poo on death, but it seemed very simple. Using the GamePad, all I did was rapidly tap on things the whole time. Perhaps the final version will be more interesting.

Mario Chase is also a simple game, but a game of its type doesn't require much to be fun. One player takes the role of a Mii Mario using the GamePad. Four Mii Toad players with Wii Remotes have to chase and tackle him before time is up in an arena not unlike what you might see in Mario Kart's battle mode. All players start at the center, and Mario gets a ten-second head start to bolt off to an unknown location. The GamePad player has a huge advantage in the ability to see a top-down map of the entire arena showing all other players' positions. The TV is split into four behind-the-back third-person views for the Toads with no camera control, making it a challenge to find exactly where Mario is hiding. At the end, you can watch a replay showing how close you came to catching Mario, or how far away you were. Last-second jukes, spins, and evasions led to many an excited yell from the Mario Chase booth. It's a great use of the Wii U GamePad and a fun family/party game. Ideally, there will be multiple arenas at launch.

Metroid Blast's two modes, co-op and competitive, seemed like they had the most depth. In co-op, two Mii Sami (plural of Samus) collect powerups and take down waves of enemies in multiple levels, unlocking more along the way. One player is on foot aiming with the Wii Remote, while the Wii U GamePad user actually flies around in Samus' ship. It's fairly standard gameplay, but still a fun experience for those wanting something more action-packed.

The Metroid Blast competitive mode is basically the same thing, but with multiple Sami on the ground all teaming up against one Samus in the ship. The ship can quickly boost around, acquire rapid-fire powerups, and fire missiles that create a big explosion, while the ground fighters use a rifle, are more mobile, and able to hide in the environment. This mode reminded me very much of the multiplayer from Starfox 64, which pitted soldier versus tank versus Arwing, minus the tank. The gamepad's ship controls took some getting used to, using both sticks to thrust in all directions while aiming by moving the GamePad around (also known as gyroscope aim), but luckily there's a practice mode.

These games were fun, casual experiences, but just like the Wii Sports series, will most likely get old relatively quick for the more seasoned gamer. No matter what you think about this direction for the face of the Wii U, let's look at one positive: it can't hurt to expose the public to Nintendo's entire library of franchises in this way. If this is what it takes to get people to buy a new Metroid or Starfox game, I'm all for it.